So this past weekend was an escape from the norm. Sarah, Kirsten, and myself decided to try a weekend of mountain biking. Little did we know we decided to try the hardest race of the SERC series. Overall, it was a blast. The first night I did the short track race. My chain got stuck on the first lap going up the hill. I almost got lapped, then came back and got second. There were only 3 of us, but I was still really impressed that I gain a whole lap back. If it was longer than 10 minutes I think I could have won, even with the whole chain issue.
The second day, I just tried to survive. I got a great position after climbing the long ass paved entrance, but slowly throughout the race was passed by people. Oh well, now I have a slight erge to mountain bike again. I'm going to have to buy a new bike b/c mine is waaay too small. I'll probably try to do the collegiate mtn bike series. Woopie!
This weekend is the State Crit race. Oh boy. I'm just going to try to hold on as long as I can.
You can see more fun pics of this past weekend from Sarah's pic page
http://picasaweb.google.com/SarahECraw/FontanaDamJam
Posted by Amanda G at 6:11 AM No comments: It's been almost a month since my last post. This is me at Edgar Soto and this is probably one of my worst attempts at going fast. I completely blew the TT, but had a decent rest of the week. This past weekend I did the Roan Groan, just for fun. An 8 mile uphill finish just for fun. Again, not another amazing result, but heck I haven't even started hill intervals. I start them today. What fun. This weekend will be Savannah GA Cup, if they have enough women to register.
Other news, I love my new place. Only setback, currently no cable! What else is a cyclist going to do for recovery?
Posted by Amanda G at 8:17 AM No comments: This is how I feel right now. I basically drove back to Knoxville, went riding, went to work, went to bed. I'm about to go back to work, then ride. whew. Tomorrow I have the day off.. atleast off work not the bike. confused yet?
Posted by Amanda G at 7:16 AM No comments:

I'm not using my laptop to make this post, because I'm at my parents. Even though they live far out in the middle of no where, they are equipped with two computers with high speed internet. Or else.. I would have to reconsider being here. I went for a 3 hr ride yesterday. I cruised through the country then into the town where I went to highschool, then a few other random loops to try to get 3 hours in. It was so freakin windy. I had a cross or headwind about 90% of the ride. Today I'm supposed to do an easy hour, but I think easy is impossible with this wind!!!

I've been so bored I've made a budget for the summer, which I know I won't stick to. I've also mapped out all the races for the whole season! Next on the agenda... the one hour ride?? hmmm.. Possibly a nap. Later, I'm going out with the mom to look for dishes, silverware, and anything else I can get for my new place.

Other exciting news? I went to get a deep tissue massage and came out with legs hurting just as bad as I went in. I guess even though I explained that I was a cyclist... which translates tired legs wasn't reasonable. He didn't spend anytime of the legs ..only my back, which feels fine. I won't be going back there. $75 down the hole!

Mark is at the beach with a few of our friends. I decided to work instead and see my mom for mother's day. For some reason I'm not dissapointed. But I will have to deal with my monster roommate for one more week. Luckily, I'll be working and riding my bike so hopefully I won't see her face often. I think Mark will be just as happy when he gets his own place. Did I mention we will be in the same building? Just different floors, so I can cruise up/down the elevator to go see him. Rain, snow, wind, and sub-artic temps won't stop me now!
Posted by Amanda G at 9:35 AM No comments:

Keeping the mind free of clutter can be hard

So a few things have passed since the last time I wrote. First, the Walnut Grove RR. Boy, it was tough, but I felt the strongest I have this year in a hilly RR. No cramping at the end. My next race isn't 'til Edgar Soto, but it will be huge.

School also just ended for the summer. Thank God. Although I didn't do much work, only one more semester before I graduate.

I believe the coolest relief is my new lease. It starts in about a week so no more bitchy roommates!! Ever! Words can't even express how happy I am.

Oh, and I got hit my a car on my bike!!! Crazy bitch turned right into me. Luckily only my front wheel was damaged and not me or the rest of my bike. She got away without any charges. Fuck her and her jacked up grill. That's Knoxville for ya.
Posted by Amanda G at 6:51 AM No comments:

The rest of the story First, I wanted to post this really awesome photo by Ben Ross. It's from the Lascassas TT when it was super cold.
Now, for the rest of the story why the weekend was craziness. Someone attempted to steal Sarah's bag of student's paper. They thought it was a purse, but super Kirsten yanked it right out of his hand. I told the cops and he was taken to jail because there was already a warrant for his arrest! How insane! Then on the way to the Roswell crit some jackass thought it would be fun to brake check is like a million times. I won't tell the whole story, but ultimately he pulled he beside us yelling and I chunked a balancebar at him and scared him!
Oh and last I already quit my job. I went in today and before I clocked in the owner told the manager and she told me I needed to go home and put on a longer shirt. I could tell this relationship wasn't going to last. What a bitch. I just got in my car and didn't go back. Called old job up and they are happy to have me, and for the pay it might be worth putting up with.
AND!! Most exciting, I signed a lease for my new place. A one bedroom on campus, off campus apartment!! Totally awesome!!
Posted by Amanda G at 4:55 PM No comments: This is the sprint at the end of the athens 3/4 race. GRRR it always helps to make my mean face. I'm not going to say much about this weekend. I felt pretty strong in both races. Roswell basically screwed 3/4's of the field over by not announcing the last lap. Guess human error happens, but twice in the same day!! Then they screwed up our placings and by what I could tell they were having problems with the other categories too. Moral of the story, never trust the officials, they are probably wacko. I will always check the lap countdown and sit and wait for 2 hours until they post the results to make sure they are correct. Apparently a camera finish isn't substancial enough to figure out who crossed the line when! Gaaah! Enough about that.
I started my new job yesterday. It seems cool enough, and tolerable, then main thing! Next weekend I'm doing a 54 miles cat 3/4 race, should be interesting.
Posted by Amanda G at 11:50 AM No comments: 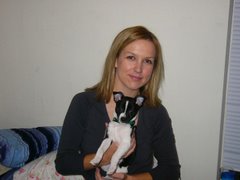